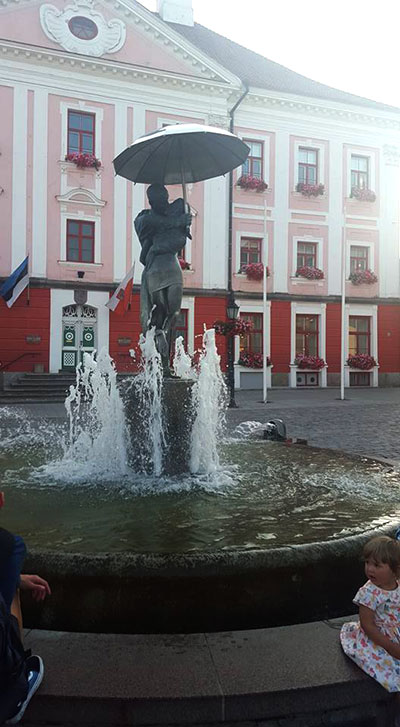 Greetings from Tartu. We have had a busy few days. The wonderful people on the island of Saarema kept us busy with all kinds of activities in addition to our camp duties. We visited an ancient church, dating from around 1200 AD, still in use. We saw two Viking fortresses, one dating back to 800 AD, the other to 1200. We saw the crater from an ancient meteor crash and learned a great deal of Estonian history.
Sea Days, a huge annual celebration at the Kurresarre harbor, began on Thursday night with many activities. I visited the harbor, but was too busy with the camp to attend events.

On Saturday we spent 6 hours traveling to Tartu by bus, ferry and bus again. Settled into the new hostel, met with team members who were not in Saarema and spent the rest of my time preparing for Sunday.

Traveled to Mustvee on Lake Peepsi with Siimon Haamer and several team members on Sunday morning. Attended worship at Mustvee church, where Siimon led worship, I preached, and Eenok presided at Holy Communion. Siimon’s sister , Maria, her husband Dirk, and their two children, Leila (4) and Siimu (2), are visiting Eha and Eenok and it was good to see them again. The children stayed close to Grandpa throughout the service.

After a wonderful lunch prepared by Dirk and Maria, we traveled to Eenok’s second church, where Siimon once again led worship and I preached. We learned that it was the 53rd anniversary of Eenok coming to serve there. After dessert and coffee at the house (again), we returned to Tartu to begin preparations for the camp that begins this afternoon.

Please pray:
For Eenok and Eha. Eha has recovered well from her heart surgery, but Eenok is struggling. He was totally exhausted after the second service yesterday, unable to stand during the service.

For the seven young people that Eenok will be confirming next Sunday.
Pray for our camp, that lives will be touched.
Pray for the team, that we will love one another and that new members will feel part of the group.
Chris is doing a great job of posting pictures on Facebook.

Blessings to all,
Pastor Kathy